Oh! What A Feeling! 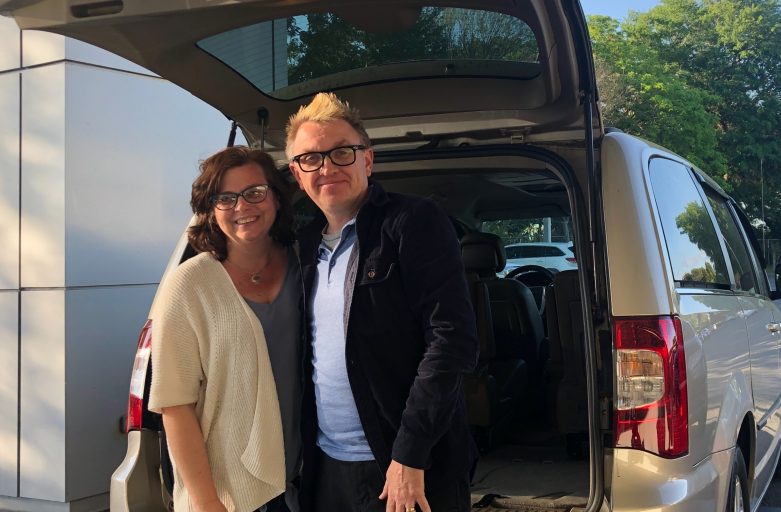 I have owned a minivan since I was in college. And if you can count a 1977 VW Bus as a “minivan,” I’ve owned one since high-school. Before my sophomore year, my Dad helped me buy a red-with-pinstripes Ford Aerostar minivan. (Remember those?) I somehow persuaded him that I needed something “bigger” to carry my show props in. And, I agreed to help cover the insurance on it. So he helped me trade in my Chevy Blazer on that yet-to-be-perfected vehicle. It was a great van, but over Christmas break that year, I was able to once again cajole him into helping me buy a newer one. This time, the blue & silver Ford Aerostar improved slightly mechanically and was “extended,” giving me even more room for the show equipment.

It was with this van that Debi and I went on our first date. And a couple of years later, we drove it up the coast from Titusville to Amelia Island on our honeymoon. Then that same van took us on back to Nashville to begin our married life together. Dozens and dozens of shows later, I moved on to a Pontatic Transport. (These are the vans that looked like an upside-down bathtub.) I burned the highways and byways, transitioning from part-time magician and student to full-time traveling performer in that red inside-and-out minivan. I loved it and wore the wheels off. Including daily 2-hour one-way trips up and down highway 27, here in Florida from our home to Cypress Gardens 6 days a week, for 4-5 shows a day.

Before our first daughter, Hannah, was born, I traded it for a much newer (and safer) light purple Plymouth Voyager. We brought her home from the hospital in that van. Just a few months later, we moved out of the minivan phase for a brief time for a full-blown Custom Van. This was a sweet, very comfortable, but bulky ride. Being a “full-sized” van, it took my young family up & down the eastern United States, complete with a cargo trailer for the show. Burning fuel like it was water.

A couple of years later, when replacing Debi’s Saturn wagon, we returned to the minivan. Two, of them as a matter of fact; When shopping at the local dealership and getting a super-deal on a gold Pontiac Montana, I asked the salesman, “do we get a discount if we buy two?” He looked a bit startled and grasped that I was half-serious. We left the dealership that day with two his-and-her Pontiac Montana gold & black minivans. A two-minivan-fam. We drove those things until the wheels just about came off. Selling the older, more milage one first, then eventually trading the other for a gold Toyota Sienna. That Toyota took me up and down the highways Sharing Wonder with thousands of people. We bought a Chrysler Town & Country (gold!) and passed the Sienna to Hannah for college. (We hung on to it until December of 2020, and with over 220k miles, we sold it for $500.)

So it was just with a bit of sadness and some relief that we traded that Town & Country in yesterday. And not for another minivan! Yay! Oh, What A Feeling!

We’ve had many vehicles over the years; each of those minivans had well over 100,000k miles when it was time to move on to the next one. These minivans have been an integral part of sharing Wonder with people across this beautiful country. Not to mention transporting our family of six from here to there and back again.

Of course, not needing a vehicle that seats six and holds a bunch of stuff just means that our family doesn’t travel together as we did for so many years. And while that is sad, it is part of life. And that’s good, raising them to go, praying that they’ll go the way they should.

(And we’ll miss the sliding doors, too.)