How To Eat An Elephant. 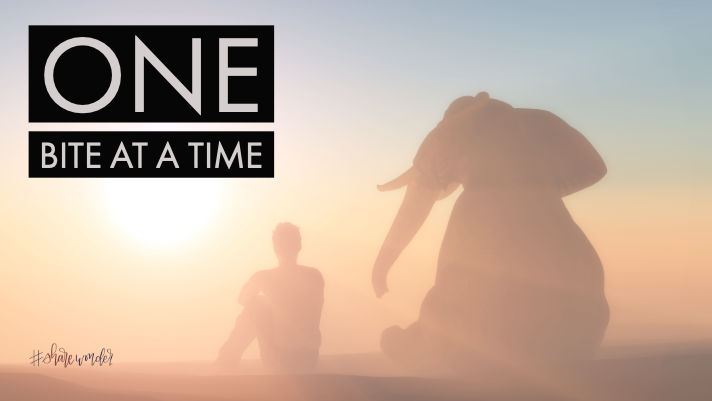 You’ve probably heard the illustration about a man eating an elephant; How would it be possible? In a way that should be a challenge to every Christian … he ate it one-bite-at-a-time. Eventually, you would have consumed the entire elephant.

What in the world has this to do with Christians or with Satan’s attacks on Christianity? A great deal … by example! We as followers of Christ are facing problems which are seemingly much more challenging that eating an elephant.

It seems as if the powers of Satan are about to overwhelm the world. Television, the movies, and the internet seem to be in a race to see if they can outdo the pornography that was actually illegal just a couple of decades ago. Immoral and illegal activity seems to be the expected norm among some political, business, and religious leaders alike. The quest for power and the quick dollar appear to be the most important goals of almost every American.

Crime, mostly drug-related, is becoming so prevalent that many are afraid to venture beyond their neighborhood and some are fearful of leaving their own home … yet most of us are not even safe there! Countries are falling to Godless Communism in our own hemisphere, and militant Islam is sweeping much of the rest of the world and Americans are enamored with our own prosperity and a false sense of governmental protection!

How is the Christian to cope with the political, personal and spiritual complexion of the world which seems to be the darkest and most overwhelming in all history?

God had a reason for placing you in the exact place where you are. Click To Tweet

God had a reason for placing you in the exact place where you are. He had a purpose in permitting you to be exposed to the people, places, and problems you encounter daily. He wants you to handle your part, one-bite-at-a-time … in the power of the Holy Spirit! Faced with the enormity of these problems, some would feel completely overwhelmed with so much to be done, that consequently, they may do nothing. But taken one-bite-at-a-time, with the Lord’s help, we can work through almost all problems and projects. You “eat” your part of the problem, other Christians “eat” their part, I’ll “eat” my part… and the first thing you know the entire problem will be gone!

Our God-ordained goal is to win the world to Christ. With things seemingly getting so bad, how can we possibly have any impact on such an overwhelming problem from our small corner of the world? Do it one-bite-at-a-time! You win your neighbor or family member to Christ, others win theirs, I’ll win mine … and soon we will have won the world to Jesus!

It is precisely because so many of us fail to take care of our part that the world is in such a mess. People who have been won to Christ and appropriately discipled through a Bible preaching church, don’t rob their neighbors or sell drugs to children. If we haven’t done our part in winning to Christ those with whom we come in contact, we have no right to complain about how bad things are becoming. It is the “teamwork” of each Christian taking his one-bite-at-a-time that will win the world for our Christ!

This same “teamwork” of one-bite-at-a-time is what has made it possible for this work to have recorded over 200,000 public decisions for Christ in these last 30 years through our events.

Some have recommended this ministry, some have donated materials and services, some have shared wisdom and advice, a few have given financial help, and hopefully, all have prayed … each one doing what the Lord wants him to do to be a part of this evangelistic effort! These 200,000 certainly are affecting multiplied thousands of others for our Lord … family members, business associates, friends, neighbors!

2 thoughts on “How To Eat An Elephant.”