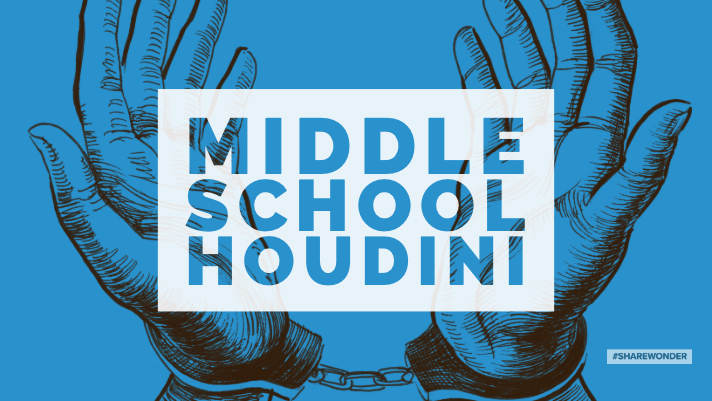 At age 13, it was my full and mature intention to become a daring escape artist. And these handcuffs are just the ticket! Or so I thought.  It never entered my early adolescent mind that a 13-year-old escape artist might be a bit delusional.

It all started with reading about the late uber-famous Harry Houdini and his incredible escape artistry. I mean, even Houdini had to start somewhere, right? He intrigued me enough to buy the gimmicked handcuffs at the magic shop. After all, they looked like real handcuffs! No one would ever think they were toy handcuffs. They were metal, but they had a small, almost unnoticeable lever on the side that allowed them to open without the key.  These professional-looking cuffs would be my ticket to the big time. Scott Humston, daring escape artist!

So, after giving them a few tries, I was ready to show them to my friends. Not so much as a “Watch this cool escape trick!” It was more of an “Aren’t these handcuffs cool?!”

So there we were, in my front yard: Billy, who lived with his grandmother a few streets over, and Mike, my very best friend.  Lakeland, Florida was the perfect place to be a middle school boy in 1986.  I lived in that two-story house on Lake Holloway from sixth grade, until I moved to Nashville, to attend University. I was so blessed to have Mike Micucci just three houses down. Mike and I were indeed best friends. And still, are good friends to this day. While other boys in the neighborhood like Billy, Tim, Anthony, and Mark moved in and out over the years, Mike and I lived on that street until we grew into young men.

Our adventures weren’t just regulated to magic and escape tricks;  We collected GI Joe’s, played ninjas in the orange groves, built skateboard ramps and half-pipes! Once in the 6th grade, we made a small tank with an old wagon and a cardboard box. It even shot a small plastic missile!  When the entrepreneur streak hit, we ran a candy stand that we’d set up after school, to sell sweets to the kids as they passed our homes.

And, it was Mike, who was over one night while my mom & dad were visiting with some friends when I dug my magic set out of the back of the closet. “I have a magic set, too,” Mike said. “Really?” I replied. “Go get it!” So, Mike ran home and returned with the coolest magic set I’d ever seen. It was from Marshall Brodien (who starred as Wizzo on the Bozo Show out of Chicago on WGN, and who sold millions of TV Magic Cards.) It was soon after that, the Mike became Marco The Magician, and I turned into Presto! The Silent Magic Clown. We, literally, went around the neighborhood door-to-door showing people magic tricks, then passing the hat. Like street performing…in reverse.

Just around the corner was our school, Crystal Lake Elementary.  Across from the school on the corner of Galvin Drive and Haywood Street was a small child care center.  It was there that Mike and I put on our first show. We had an old toy barrel that I popped out of—and various other cheap magic set tricks that we took turns performing.

When we first went there and solicited our show with the owner, she asked: “How much for a show?”

“How about three?” She responded.

“Okay.”  So, three bucks it was. It was my first lesson in negotiating. Marco & Presto survived for several months.  I eventually decided not to hide behind the silence and clown make-up. After all, Houdini spoke on stage.

So I was in the front yard with Billy and Mike, showing off my rad Houdini escape handcuffs. Billy was the most enthusiastic, holding up his wrists. “I’ll try ‘em out!” … As I showed Billy how the secret lever operated, I gave the cuffs a slight squeeze — to make them even tighter.

So, as I squeezed one of the cuffs a bit tighter, Billy yelped in pain. Startled and slightly embarrassed, I pushed the miracle-escape lever up. Nothing happened.

“Get them off,” Billy huffed. So, I tried again, on the other side — not squeezing that cuff, and it released. But the left side of the cuff, after several attempts, was utterly stuck. I tried pulling and finagling the lever, then the pulling on the cuffs. Billy was getting a little panicked. Then he tried. With every attempt to free it, Billy’s hand began magically changing colors. So, I did what any 13-year-old boy would do in this precarious situation: I ran and found my mom. Although my mom is a marvelous woman, she quickly realized she could do nothing. She didn’t panic, of course, but, as most mothers do, she gave us sound, helpful advice and told us to ride our bikes up to the fire station.

Go up to the fire station,” she said matter of factly. “They can cut the cuffs off,”

Thanks, a lot Mom.

But I knew there was nothing more to be done. Even at that age, you know your friends are worth more than your stuff, even super cool Houdini escape cuffs. So Billy, Mike and I all hopped on our bikes and headed up to the fire station.

The fireman at Polk County station number seven thought that we were quite the sight:  Three middle school-aged boys riding their bikes up to the open garage door. Billy’s hand had morphed into a reddish-purplish swollen ball by this point; the kind of war wound middle school boys are almost proud of. The firefighters took a quick look, grabbed the large bolt cutters — and snap! In a matter of a second, Billy was free. His hand returned to its regularly scheduled color, and with the demise of my regulation gimmicked handcuffs, my career as a modern escape artist was put on hold.

The above is from Scott’s forthcoming book, Sharing Wonder.

Part memoir, part inspirational roadmap,  Sharing Wonder is a conversational collection of stories about a boy who was born with a speech-related birth defect, how he became a magic man and what he learned about the real magic of Wonder along the way. Drawing on his experience as an award-winning family entertainer, magician, and speaker, Scott Humston’s personal story of overcoming great physical challenges, while embarking on his own magical mystery tour will encourage all ages — especially parents of young children — to seek and discover the miracles that surround each of us daily.